>This post is from Coffeedad. It’s his turn. This letter is his, the dad side of things, and from his perspective as a Father, and also as a physician.

This letter is an open letter to anyone who has a heart to hear us and also wants to know why we are pushing so hard.
Why don’t we just quit and accept that we have to wait?
Stop being so pushy already…sheesh. Right???
NO.
We are advocating for our daughter to come home because she needs to be home, because we love her, because it is right to allow her to travel to join her family.
We are advocating for this protocol to change in it’s application to adopted children because to apply it to adopted children, especially those who have already completed treatment for TB and/or who are HIV+ is, simply, wrong. 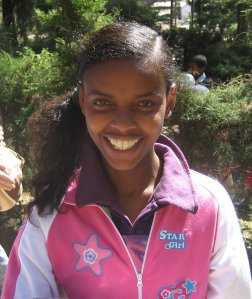 To Whom it May Concern:

This is a picture of my beautiful daughter, Marta, above.

My wife Michele and I have recently become the parents of my new 12 year old daughter Marta. Marta is Ethiopian, and sadly left orphaned by the ravages of AIDS in her country. Without any family, she was taken into an Ethiopian government run orphanage in Addis Ababa. Somehow in her young life, she also contracted tuberculosis for which she has recently completed eight months of standard tuberculosis treatment, with thankfully good response and several follow up sputum smear tests, all of which were negative. On March 31 of this year her adoption was finalized and we legally became her parents. Both Michele and I are United States citizens. Had our adoption become finalized just one month earlier Marta would be home with us now and I wouldn’t be soliciting your help.

The day before we were to travel to Addis to pick her up and bring her home we were notified by the Embassy through our agency that she would not be cleared to travel for a minimum of two additional months, and perhaps longer, due to very recently implemented new CDC Technical Instructions for the Screening of Immigrants. This new protocol requires negative sputum cultures in anyone with any suspicion or history of tuberculosis, without any regard whatsoever to whether it was known or unknown, treated or untreated, successfully or unsuccessfully.

This very burdensome and overly stringent requirement has been implemented only by the US and only piecemeal, in regard to some countries, despite the fact that the CDC and World Health Organization as well as the American Thoracic Society and the Infectious Diseases Society of America all individually or in collaboration have reported that:

“as yet no case of clinical or bacteriologically confirmed tuberculosis disease associated with exposure during air travel has been identified”
— W.H.O

“the overall public health importance of such events [potential transmission of tuberculosis during air travel] is negligible” — A.T.S., CDC, I.D.S.A.

Three weeks before our scheduled Embassy Visa appointment for her, the CDC implemented their new guidelines in Ethiopia and a few other countries only. If Marta were from China, India or Russia or any one of a hundred other countries, her negative sputum smears would be sufficient for the CDC, and the State Department would issue her Visa and allow her to travel. What is more, if we had given birth to her while living in Addis Ababa and she was now coming back to the United States with us for the first time, she would not be subject to any kind of screening at all. If she was coming on a student Visa, a work Visa, a visitor’s Visa, a diplomat’s Visa or any one of 50 other Visas she would be here now and also subject to no screening.

The injustice of this situation is compounded not only by the very questionable medical basis for subjecting her to it in the first place, when virtually every one of the other 300 plus passengers on any flight here from Addis Ababa is not subjected to any kind of medical screening and statistically at least one of them or more will have active tuberculosis, and dozens are likely infected, but the situation is further worsened by the Embassy’s false assertion that no one there has the authority to waive her CDC required two month long sputum culture test for any reason and the CDC’s Department of Quarantine assertions that no one there has the authority to direct the Embassy to waive the requirement since the CDC is only advisory to the State Department.

I had a long conversation this week with one of the head doctor in the Atlanta Office of the CDC Division of Quarantine who could not refute any of my above assertions, acknowledged the inconsistency with which this screening algorithm was being applied and even that the legally adopted minor child of US citizens was a very different “immigrant” than the general immigrant population for whom the Technical Instructions were written. Nevertheless, he also told me that they would not waive the testing requirement for Marta or anyone else and that they would also not process our I-601 medical waiver “for persons with Class A or suspected tuberculosis” on the technicality that until the two month test was over, her medical evaluation was still incomplete. If after the two months that the test takes, it came back positive, then we could use the waiver. This loop invalidates the use of this waiver; it negates it’s use.

My request for your help is two fold. First, please help us get this test waived by whoever has that authority and get my Marta, child of US citizens, home now. Second, please realize that many, many other families who have or are in the process of adopting orphans are caught in the same net since all children with positive HIV tests are also subjected to it and that an ultimate solution is to recognize these legally adopted children of US citizens, as “US citizens” when the adoption is finalized not after they have come to US soil.

I can supply copious medical documentation of the marginal impact of this sputum culture requirement on the importation of tuberculosis and the negligible or non-existent risks of infectiousness to travelers and our citizenry for persons who have received or are receiving treatment for tuberculosis and have negative sputum smear tests.

Please consider this letter with a mind to what is right and decent, and with the medical data supporting our case. If you are a father, please consider if this was your child and what you would do. Please help us bring our daughter home and change this policy for adopted children, our children.