>This is from MlLane Layton, to clarify some misconceptions, worth a look. Mclane is doing good work, important work, and her heart is in the right place and she is trying to help sway change. Needed change. Read. Think about it, help if you can.

And I just want to remind anyone who might forget in the jumble of the legalese and legistlative verbage, this is about our kids. Yours. Mine. Ours. And they have faces…..

Open Letter to the Adoption Community

As an adoptive Mother, the President and Founder of Equality for Adopted
Children, and a former senior legislative aide on Capitol Hill, I would
like to address some questions that have been raised about the newly
introduced Foreign Adopted Children Equality Act (FACE Act). These
questions have caused some to suggest the bill should not be supported.
This is unfortunate, because the FACE Act will bring significant
improvement to the adoption process and will, if signed into law,
provide equality for our internationally adopted children as well as
save adoptive parent’s time, money and regulatory hurdles. I know
because I was deeply involved with its predecessor.

The FACE Act was introduced to amend and improve upon the Child
Citizenship Act of 2000 (CCA), a bill introduced by Senator Don Nickles
and Senator Mary Landrieu. At the time the CCA was introduced and
passed, I was Legislative Counsel to Senator Nickles and was responsible
for shepherding the CCA through Congress. The bill was conceived after
my husband and I adopted three siblings from Eastern Europe and I
discovered that despite the fact that my husband and I were both
American citizens, our citizenship did not transfer to our foreign
adopted children as it would have if they had been born to us abroad.
As a lawyer I found this disturbing because I knew that under adoption
law, once a child is adopted, that child is entitled to all the same
rights, duties and responsibilities as a biological child. The law says
they are to be treated as if they were the “natural issue” of
the adoptive parents. CCA was drafted to remove discrepancies between
the treatment of children born abroad versus children adopted abroad to
U.S. citizens. In short, to bring adoption practice into line with the
law and in the process ease a number of procedural burdens unnecessarily
borne by adoptive parents.

The CCA began the process of addressing a primary inequality: If an
American gives birth to a child overseas the child is considered a
citizen from birth and is given a U.S. passport and a Consular Report of
Birth (which acts as the child’s birth certificate). The child is
allowed to enter the United States as a citizen with documentary proof
of citizenship. In other words, the child does not have to go through
an immigration process. Not so for an adopted child who must obtain an
immigrant visa, go through a very different (and more costly and
cumbersome) process even though they are every bit as much the son or
daughter of American citizens. Unfortunately, the United States is one
of the few developed countries that still treat internationally adopted
children of their citizens as immigrants and force adoptive families to
go through an immigration process to bring their children home.

U.S. Court decisions have established adoption laws that recognize that
adopted children are entitled to full equality of treatment as
biological children. Yet despite the passage of CCA, not all
inequalities have been addressed. The FACE Act would align U.S. adoption
laws with U.S. statutes by recognizing all children of U.S. citizens as
equal, whether biological or adopted. The FACE Act would rectify
inequities both past and present. Regrettably, as I know is often the
case with legislation, some have misunderstood the contents of the
legislation.

Some allege that by removing adopted children from the immigration
process the bill removes the safeguards that protect adopted children,
their biological families and their adoptive families. This is a
completely incorrect assertion. This bill absolutely upholds current
requirements in regard to approval of parents to adopt a foreign born
child, preserves current safeguards, and maintains current regulations
related to intercountry adoption. Here’s how:

* The FACE Act continues to require that before citizenship attaches
to an internationally adopted child, adoptive parents must be approved
by the U.S. government as fit to adopt, just as under current law.
* Adoptive parents will still need to meet the same requirements
currently submitted for approval of an I-600A or I-800A including an
approved home study, criminal clearances and all other documents that
are now part of the approval process.
* Preservation and Maintenance of Safeguards and Investigations.

* The FACE Act continues to uphold and require all immigration
safeguards currently in place to ensure that a child has been adopted
legally without fraud or trafficking.
* Conditions required to fulfill an I-600 or I-800 form will continue
unchanged including an orphan investigation as mandated under current
law.
* The U.S. government will continue to affirmatively determine that a
child has been adopted appropriately and that the child meets the
adoption requirements of U.S. adoption law for international adoptions.
* A welcome change in the FACE act would be the elimination of the
paperwork, procedures and costs required to file for an immigration visa
after an adoption has been completed and the child has been approved by
the U.S. government as having complied with U.S. adoption law governing
international adoption.

Put simply, American adoptive parents abroad would take their
documentation of a legal and appropriate adoption and follow the same
process as American biological parents who gave birth abroad. The
entire process would be simplified and standardized for both sets of
parents and most importantly, would apply equal treatment to the
children as established in U.S. adoption law. Time and travel costs for
adoptive parents would be reduced lowering further the barriers to
international adoption.

The FACE Act makes no changes to current regulations related to
intercountry adoption. Current adoption law language does not detail
what must be done to approve a family to adopt or what paperwork must be
filed to get an immigration visa. Rather, the details are found in the
regulations implementing the law. This bill and subsequent regulations
would do the same. The FACE Act merely sets the parameters of how the
law would be implemented and the subsequent regulations would provide
the specifics of how it would be implemented.

Establishing Equality for All and Respecting Heritage

Another unfortunate misunderstanding of the FACE Act arises from a
section of the bill that amends Section 301 of the Immigration and
Nationality Act (INA), which defines who is a U.S. citizen at birth.
Currently, this section of law provides automatic U.S. citizenship to
children born to U.S. citizens abroad, but not to those adopted abroad
by U.S. citizens. The practical effect is that under the status of an
immigrant instead of a citizen at birth, the adopted child could never
be President of the United States even though a child born in the same
foreign country at the same time to American citizens could. Amending
this section of law to include our internationally adopted children as
citizens from birth will finally correct one of the major remaining
inequalities that our children suffer under federal law.

Some have erroneously concluded that this provision will strip adopted
children of their birth country’s citizenship and erase their birth
history. In actuality, the FACE Act will help support adoptees who seek
to learn more of their original birth history and reconnect with their
country of origin. The FACE Act includes provisions that state:

* “It is the sense of Congress that the government of each
foreign country from which children are adopted by citizens of the
United States should provide documentation of the adopted children’s
original birth history to the adoptive family in accordance with the
laws of such country.”

* “Nothing in this Act, or in any amendment made by this Act, may
be construed to abrogate any citizenship rights provided to an adoptee
by the adoptee’s country of origin, or nullify the facts of the
adoptee’s birth history.”

To the extent a foreign country allows dual citizenship and the
privileges that accompany that citizenship, that child will always have
those privileges as a citizen of that country in the eyes of that
country. No legislation passed by the U. S. Congress can change
citizenship laws of other countries. If a country chooses to negate the
citizenship rights of a child born in that country because they become a
citizen of the United States, there is no law that the U.S. Congress can
pass to rectify that decision.

Further, although Congress cannot pass laws ordering other countries to
provide original birth documentation to adoptive families or to change
their citizenship laws, these provisions mark significant steps towards
establishing U.S. policy in these regards and would strongly encourage
countries from which children are adopted by American citizens to
provide such documentation and maintain such rights.

The FACE Act also improves the current citizenship process for
international adoptees with a provision that rectifies the damage that
is done when adoptive parents fail to take the necessary steps under
past and current law to acquire U.S. citizenship for their child. Prior
to the CCA, internationally adopted children had to go through a
naturalization process to attain citizenship. Many parents wrongly
assumed that their adopted child was a citizen because they themselves
were citizens. Unfortunately, this was not the case and there are many
adult adoptees who found out much later in life that they are not
citizens.

Over half the international adoptees enter this country on IR4 visas and
risk losing their citizenship rights if their parents fail to readopt
them. Many children do not find out they are not citizens until they
apply for a passport or for college scholarships. A number of adoptees
have been deported back to their country of origin due to minor crimes
they have committed because their parents failed to take the necessary
steps at the time to acquire citizenship status for their child. The
FACE Act rectifies this for all future international adoptees by
conferring citizenship upon completion of the adoption and the U.S.
determination that the child was adopted according to law. Citizenship
is conferred with no further action required of the adoptive parents.
This is a significant improvement over current law and will eliminate
the tragic stories of adoptees deported to their country of origin with
no knowledge of their original language, no support structure and no
ability to return to the United States.

For deported adoptees, The FACE Act allows these adoptees to file for
and receive U.S. citizenship if U.S. citizens adopted them under the age
of 18.

In summary, the changes made by the FACE Act are significant but easily
implemented. The FACE Act would:

The sponsors of the FACE Act – Senator Mary Landrieu, Senator Jim Inhofe
(S.1359) and Representative Diane Watson and Representative John Boozman
(H.R. 3110) are great friends and supporters of the adoption community
and have crafted a bill that will provide equality under the law for our
internationally adopted children and allow them to benefit in all ways
from full American citizenship.

In closing, I recommend that all read the relatively short FACE Act bill
in its entirety. It can be found at:
http://thomas.loc.gov/cgi-bin/query/z?c111:S.1359:/
In addition, I
invite you to read a detailed section by section explanation of the bill
as well as answers to Frequently Asked Questions that can be found at
the following link:
http://www.equalityforadoptedchildren.org/legislation/face.html
.
Once you do so, I believe, like me, you will find this bill worthy of
your wholehearted support.

For the sake of our internationally adopted children, 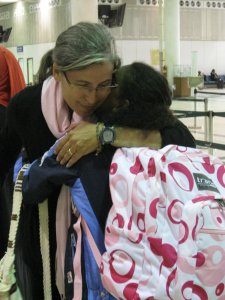