New  underwear is so much fun.

But this time is different.  Not only because Gabey is a brilliant sweet charming talented child, and no I’m not biased, thank you for asking.  But it’s different because, for the first time ever, it’s been a snap. 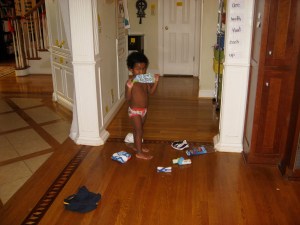 Now, I hate potty training.  Because my nature is a lazy slug.  And potty training, it’s messy.  And inconvenient.  Just contemplating it makes me want to go lie down.  And there are thousands of books on “how-to” and “Secrets-of” and advice out the wazoo.  I think somewhere on my shelves I own at least fifty of them.

But, little did I know…there really IS a secret to potty training.  Ok, two.  The first one is not so much a secret: timing.  Ya gotta wait until the kid is ready.  I did have a go at it once or twice w/ Gabey over the summer.  Clueless.  Hopeless.  NOT ready.  We bailed.  And ya can’t wait TOOO long (that was my mistake w/ oh, most of the others – except Miss M.  She did it on her own and told me after, I swear. At two. Brilliant girl.).  But, it’s been cold and snowy and we’ve been hunkered down in the house and he just turned three.  Plus he’s in a phase where he refuses to wear clothes.  So, apparently, it’s time. Now.  Whoohoo!

{Yes, my house is a mess, it’s that shedding clothes thing, what can I say?}

But here is the “new trick” for this “old dog.”  And before I say it, I will point out that I realize it’s one of those ridiculous  “everyone knows it but you” kind of things.  And I would also like to point out that I will – evenutally – overcome my resentment towards my friends failing to let me in on this.  And I might, someday, overcome the  humiliation of NOT knowing this.  I long ago accepted I was no “super-mom.” This confirms it.  No matter how many kids I have.

So, here it is: BACKWARDS.

Backwards.  DOH! You put the kid on the toilet backwards!! Why didn’t someone tell me? Ahem -Jean? Toni? All of you bloggy gals?  You can’t presume I know ANYTHING.  I’m a dolt.  I had no idea!  Forget the tiny messy potties and the slippery seats and holding them up on the seat getting a cramp in your back from lifting them….let them climb on backwards, facing the tank!

Ok, apparently, everyone!  This was a light bulb moment for me.
Thank you, finally, Jean.
Maybe it’s a southern thing?
Feel free to sound off here and let me know if its regional so I don’t feel like a total dolt (tho I’ve lived in the south long enough to train a few and no one told me.  Not that I”m holding a grudge, Jean……).  Did you moms know about this?? Sheesh.  Well, I didn’t.  But it totally was a light switch for my Gabey.  Ok, and me.  Hey, he can climb up on  his own, check everything out, feel secure.  Very empowering.  Done deal.  He’s trained for daytime and almost for night.  In less than a week.  AMAZING!

So, for those of  you who share my prior lack of knowledge, I”m sharing.
For those of you who presumed we all know, you’re wrong.
For me, I’m just celebrating.  Whew.

Leave a Reply to The Busters Cancel reply