Right? I mean, don’t you sometimes think, “Doh, why, oh WHY didn’t I buy stock in bandaids?” Because your kids go through them by the gross. Because you commonly walk into the kitchen or bedroom and find little discarded fluttery piles of bandaid wrapper remnants, left behind. Because, as you stand in the market and eyeball the different kinds and colors and characters and compare the relative values of the choices…you think, “I went into the wrong line of business. Forget plastics. I should’a gone into bandaids. I’d have that Bahama beach house already!”

No? Ok, maybe that’s just me. I admit it, I’ve been chintzy at times on the bandaids. The bandaid for the invisible booboo, it used to make me (way back when I was much younger of course, ahem) blanch at bit. Then I finally relented and thought, “Meh, whatever helps. Fine, get a bandaid.” Heck, I got all magnanimous and everything about the bandaids. I let. It. Go. Big of me, right? Sigh……

Now, after this Empowered to Connect Conference, my eyes have been opened anew to the beauty and wonder of bandaids!

First, the good stuff. And sure, maybe you hip and savvy moms already had this all figured out. And I’ve had my moments of understanding too, give me a little cred…but still…to have it visibly on big screen shown to me and 900+ other parental unit types….well, it brings the point home: bandaids are a fantastic tool for attachment and healing. What’s more, bandaids are a great signifier of same. What’s that? YEAH! That endless need for bandaids, if brought to you, can show a trust that YOU are the one to help heal a hurt, however small or vanishing. Right. Do to be clear, it’s not actually about the bandaid. I just use that for the catchy title. It’s about the need to be nurtured. It’s about trying to reach across that gap in trust..to grab onto your kid on the other side.

Let me back up a moment. In this conference last weekend , one of the first videos that Dr. Purvis showed was of a ‘nurture group’ (I know, the titles make me squirm sometimes, thinking how my kids might react to that term, but, still…) with teen girls in a residential treatment center. Now, I’ll tell you, I typically come to these resources thinking mostly of my newest daughter, adopted as an older child. It’s been a tougher road that one, and it’s easy to get a little stuck on the ruts there. But this video instantly had my hyper focused attention, because one of the girls reminded me so disconcertingly much of one of my other daughters. This other daughter does manifest attachment issues but due to brain injury/trauma/behavioral stuff and the sheer complexity of her little self. And it’s easy to forget that her issues are so there, there. But Friday, I sat up and had that klaxon clanging; because I could’a been looking at a possible future glimpse of my girl in manner and general attitude. Not a certain vision. A possibility. Key point, that.

Anyhow…This video was about the idea of asking for help, for nurturing, by asking for a bandaid for a hurt. And this girl, in the video, she couldn’t or wouldn’t do it. Not in that session anyhow. And Dr Purvis was her usual wonderful accepting nurturing self and didn’t make a big deal of it. Which means, that acceptance allowed/empowered that very girl (by report) to soften – she did ask for that bandaid help, the very next day. Presenting the idea of being accepting to opening up the avenue or idea of healing, allowed this child to be vulnerable enough to take one baby step forward to admit she might need a bit of it. Just one bandaid’s worth. Hugeness.

And what that also shows, is that all those zillions of times your kid(s) come to you for bandaids? Ask YOU to look, see, kiss, comment on, PUT the bandaid on their invisible or visible hurt?

I know, you already know all that probably. I did/do too, most of the time. But when you are in the trenches and/or parenting one or more kids from hard places or with needs or whatever…well sometimes that reminder can be a brick on the/my head. And the daughter that we fight so hard to find a way to, to attach to and her to us? Well golly don’t ya know she’s come to me, oh, let me think here, about 700 times I think to show me an owie or a bump or an ouch. To see it. To hear it. To kiss it. To bandaid it. Sometimes it’s not even real, really. Sometimes it’s somatic. I’ve rolled my eyes over it as she walked away. Shame on me. Because I should’a gotten on the table and danced. As Karyn Purvis pointed out this weekend, “That’s paydirt.” I can’t have long conversations with her about her attachment and her issues. She has delay issues that prevent it. But this doesn’t need conversation, it works at any level. And it showed me something that made my heart and head go “zing!” Our issues with her are less attachment than I thought all this time. Our issues with her are more cognition and anxiety (and those are many, but still…). And yes, some attachment, especially when the anxiety makes the survival skills raise their ugly head again. But, still, not as MUCH attachment as I presume too often.

Those hundreds of hurts, of complaints even, of owies that I wondered about in dismay for the past two years….”Really, you fell in the bathroom again? Your knee? Oh, ok, I’ll kiss it. Be careful, ok?” Well, even though we weren’t GETTING each other totally…we were still stepping through the attachment dance.

Are we done? No! Not for a lifetime, I’m guessing. But have we made progress I didn’t even see?

And my other daughter, the one who I had hyper radar sighting in the video? The one who does/doesn’t have attachment stuff on any given day? One of my other complicated kids? Well, we’ve had some more connected progress after this conference. Not perfection. But strides, steps. Screwups too; me. But, she’s asked me to kiss her forehead and cross it each night at bedtime and getting out of the car at school this week. And Monday she stepped on a toothpick. It hurt. And guess what?

She wanted a bandaid. No, she ASKED ME for a bandaid.

Wanna know what I said? 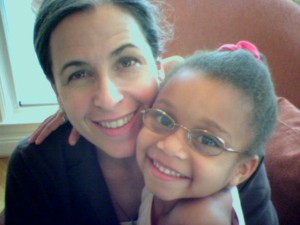 Zing went the strings of my heart.

7 thoughts on “Attachment tools and signals: the bandaid.”