Today is the Feast of the Archangels! 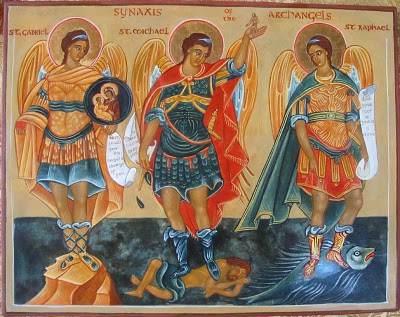 Now, some of you might dismiss this..slotting the idea into sentimental drivel.  But, I don’t.  Sure, the angel fad of the last few years/decade was filled with a glut of angel images and notions; sentimental drivel and bad paintings and pop culture bleeding into new age pap.  But, when you’re talking about the real deal, the theologically defined “Angel’, or, “Archangel” no less…then you are considering an entirely different being.  Literally.

Angels, Archangels are beings that we can’t really wrap our  minds around.  This excerpt is succinct:

The Catechism of the Catholic Church teaches us that, “[T]he existence of the spiritual, non-corporeal beings that Sacred Scripture usually calls “angels” is a truth of faith. The witness of Scripture is as clear as the unanimity of Tradition.”

Angels are pure, created spirits. The name angel means servant or messenger of God. Angels are celestial or heavenly beings, on a higher order than human beings. Angels have no bodies and do not depend on matter for their existence or activity. They are distinct from saints, which men can become. Angels have intellect and will, and are immortal. They are a vast multitude, but each is an individual person. Archangels are one of the nine choirs of angels listed in the Bible.

Angels are messengers.  The Archangels, they are the most exalted of them….they are like the navy seals of the angels.  You don’t send any wimpy or unskilled or incapable person to deliver the most important messages.  You send the most skilled, brightest, strongest of your company/team/family.  You send the one who can get the job done. RIght? Right. Even as a mom, when I need something dealt with and need a representative…I send my most able child at the time (most mature, bright, strong, kind: able).  God is no dummy, he knew that an angelic host was gonna be a big help with us recalcitrant foolish human children.

So today I’m considering the Archangels.  I’m grateful for them, I love this concept and the actuality of them.  I believe in them, seriously.  Not in a Thomas Kinkade sentimental-light-fairy kind of way.  But in an olympic warrior kind of way.  They are not to be messed with, but rather, considered with wonder and awe and gratitude.

So, today I’m celebrating this feast of the Archangels.  It is – painfully – evident, our stone cold hard world needs them.