Meet Edith Stein,
aka St. Teresa Benedicta of the Cross.

She’s one of my heroes. She is an amazing woman. It’s her feast day today. Go read about her here.
She was born and raised Jewish and German, after she went to university she became an athiest. She was an amazing intellectual and scholar studying philosophy and the then current academic vogue of phenomenology. However, after reading another one of my favorites, and one of my patron saints, St. Teresa of Avila, she recognized Truth. And she converted to the Catholic church. That was a huge thing to do, in wartime Germany for a Jewish raised athiest scholar…to convert to Catholicism. Also not so popular at the time. Her mother sat shiva for her. Not only did she convert, she became a Carmelite nun, first in Cologne (where my guys, husband and big boys were able to visit her convent, so cool!) eventually ending up in Holland. However, even that wasn’t far enough from the Third Reich and eventually she was taken from her convent and transported to Auschwitz, where she died, a martyr for her faith, in the gas chambers for being both a Jew and a Catholic, a double whammy for the Nazi’s.

She’s a hero though, she spent her life searching for Truth, no matter if it was popular or vogue or presented challenges or changes. In a way it was her intellectual craving to search for Truth no matter where it took her, but of course, it was also Grace calling her to Himself.

Anyhow, I think she is a modern example of courage and strength, and of course she appeals to that part of me that connects with my Jewish grandmother and my old academic self. But mostly, she is just another strong, courageous woman for me to look to, as an example of one who stood for Truth, regardless of whether it was popular or easy. I need that example, maybe especially today. 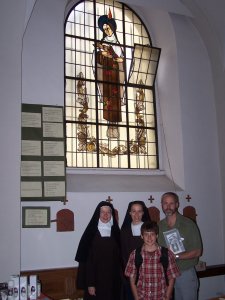 “God is there in these moments of rest and can give us in a single instant exactly what we need. Then the rest of the day can take its course, under the same effort and strain, perhaps, but in peace. And when night comes, and you look back over the day and see how fragmentary everything has been, and how much you planned that has gone undone, and all the reasons you have to be embarrassed and ashamed: just take everything exactly as it is, put it in God’s hands and leave it with Him. Then you will be able to rest in Him — really rest — and start the next day as a new life.”
St. Teresa Benedicta of the Cross
http://rpc.technorati.com/rpc/ping
Atom 1.0: http://blogname.blogspot.com/feeds/posts/default

1 thought on “>Another Hero, another feast day”