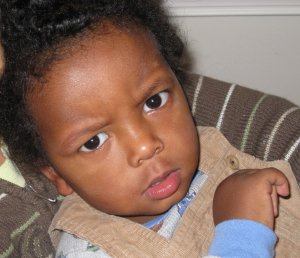 It’s happened.
He found it.
Gabe found that toddler power word: “no.”

His words have really started clicking. It’s great fun to listen to him. He can even put a few two word bits together: “bye bye mom” and “get down” (yes, he might have heard this one a few times…it’s a busy house, ok?). But this weekend, he finally claimed the biggy: “no.” But he does “no” with his own style, by which I mean, with volume and force and the cute mispronunciation: “Doh.”

To get the full effect, you have to imagine this at full throttle, full shout and repeated a minimum of four times, face stern or furious before he bursts into tears. He sounds like a cross between a Simpson character and a kid with a very stuffy nose. He hauls this show out every time you tell him “no Gabey, uh-uh” and he doesn’t want to be told no. So he just yells it back and then comes to me to be held as he starts to cry. Because it’s scary to try to grab such power for a little guy! We try not to laugh, but it’s hard not to. So it doesn’t have quite the effect he’s hoping for, not yet. Now of course we have to work on teaching him, “no, please.” We’ll get there.