Today is the feast of Our Lady of Guadalupe!
She is Patroness of the Americas and protector of the unborn.
She is Mary, our Blessed Mother.

I grew up in the southwest, in Arizona and then California. The influence and devotion to Our Lady of Guadalupe was all around me. It was pervasive in the Catholic culture of the southwest but even in the broader culture of the region. Images of her abounded and her story was one told to even small children, perhaps because of the proximity to Mexico and the overlapping of the cultural influences. But it seems like I have always known her, to some degree.

However, only in later years as I became an adult, indeed almost middle aged, did I start paying attention. Maybe it was because I was having babies, or wanting to have babies, or wanting to adopt babies….and her prayers and protections suddenly seemed more needed, more urgent. Maybe it was because we had transplanted our family to the south and we felt like foreigners. We needed now to reclaim what was “ours” in a way. Both Coffeedoc and I grew up around Our Lady of Guadalupe and she was a comforting old friend. Her image and the southwestern, Mexican influence was part of the fabric that was woven into us.

At any rate, for Coffeedoc’s 40th birthday we took a trip, to see her image at her church. We went to Mexico City, to Tepayac Hill, to the Basilica. It was a humbling trip. Mexico City is beautiful but harsh. Going to the Basilica, passing the pilgrims who walked – some on their knees – to see her miraculous image made us fall silent. Seeing the families camped there, kids running around, but camped on the plaza surrounding the Basilica, made us wonder. The circus that surrounds this site, any major pilgrimage site (no matter the faith), made my head hurt and my eyes blur a bit; so much to take in, to see, hear, smell. The vendors selling everything from kitschy baubles to tiny tin milagros; it was overwhelming. The lines of people, just to squeeze in the door of the new basilica or through narrow doors of the old basilica, were daunting.

But, once we got inside the church we saw it. We saw the tilma. The tilma is a piece of cloth, made of plant fiber, that was worn as a sort of cape. It was a common article of clothing way back then. But the tilma of St. Juan Diego is a miracle we can still see now. This tilma carries the image of Our Lady of Guadalupe and scientists haven’t been able to explain it yet. It is over 400 years old and should have simply crumbled with age, on the most basic level. It has survived to this day, despite all odds. Some might say it’s a legend, some might poo-poo this. But I was there, I saw it and I can’t figure it out. So, I choose to believe it.

I believe it was given to us as a sign of contradiction in this hard cold world. I believe that we still crave the mystery and the imagining of the impossible – that the impossible IS possible in this material world. I think that is one of the greatest things about faith: it is literally a belief in the impossible.

Because with God, all things are possible: even roses in the dead of winter and a tilma that carries an image that is somehow not made by man and survives for many hundreds of years; that prayers can be answered and that we have a Blessed Mother, to watch over us as a mother does, one who we can turn to for comfort and find the transforming grace found in prayer. 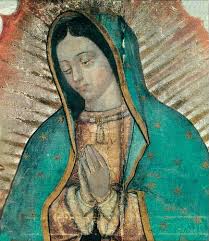 So, I do love Our Lady of Guadalupe. She is a strong woman, not some fair wilting lily who leans against a window pining away. She is a strong, in the most enduring way there is: she is a mother.

Our Lady of Guadalupe, pray for us!