>There is a scene in a movie that I can’t get out of my head.
The movie is “What dreams May Come.”
Many absolutely despise this movie, and as a Catholic there is clearly questionable theology throughout….but even so, I liked the movie. It was a visual feast, from the oil paintings of the wife to the Bosch-like horrific visions of hell. But those things aren’t what keeps sticking in my head lately.

It’s the hell scene.
Now, disregard the dicey theology here. Go the essence of it: the meetup.

Robin Williams goes to hell to find his wife.
He GOES to hell and when she is incapable of seeing him, mired in her own pain and unable look up and out of herself (which IS hell)...then he sits there.
He sits with her.
He can’t talk with her, really, she can’t hear him.
He can’t just bodily lift her up and move her out of this place.
He meets her where she is.
Read that again:
He meets her where she is.

And it’s the meeting her where she is that gives her the rung to hold onto, him, and to look up, to blink to awareness of what’s real, for just a moment.

Now, hang with me here.
(And again, I realize that many think this is the worst movie of all time. I get it, be that as it may, this scene has been rattling in my brain – thus blog post).
You moms and folks who are trying to live with a kid from hard places…
You moms and families who are working through an older child adoption, especially teenage…
You moms who have kids who have trauma backgrounds and/or various special needs….
Think about that.
Because we all know that “meeting up” is one of the only ways to help.
We have to meet them where they are…at that moment.
Often, more than often, it’s a mini slice o’ hell.

And that can sound so very lofty.
We think, at the start, and say with a trill, “Yes, darling, I will go to hell and back for you!”
But, um, ya know…going to hell and back?
Well it is, um, HELL.
It’s exhausting and makes you (ok, me) want to cry and say “Forget it, I’m done.”
I have family and friends sometimes say “Can’t you just tell ’em to toughen up? I mean, cmon!!”
Now as a mom of eight, my standard M.O. is not too much coddling– if kids are crying and such and I know that bone is not poking through skin and a hospital rush isn’t imminent, I say “You’re fine, you’ll be ok.“
Thus, my other kids, pals, and family might well expect me to fall into that mode.
However, this is different, exhaustingly so…….I sigh and say, “Well, I wish I could. But nope. Can’t.”
Because even though sometimes I try to selfishly avoid and tiptoe around whatever acting out or somatic fallout or whatever is playing out…..if it’s a trigger response (and not just moody teen)…then you can’t ignore it, you can’t go around it, or over it, (isn’t there a kiddy song like that??) you have to go through it.
You have go to it, meet it, and go through it…with them.
Again, sounds all noble, right?
Um, not.
It’s usually messy and causes fallout with the other kids and even between the parental unit types, even for yourself.
Because it’s hell.
But unless you go sit there and BE with them, somehow, it’s not gonna get better.
It might get worse.

So. Ya gotta go.
Meet them.
Wherever they are. 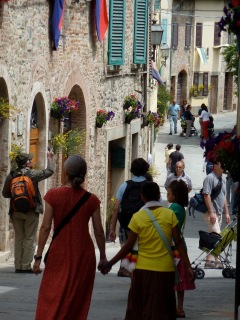 Maybe then, they will blink a bit and be able look up and to breathe a bit.
And then maybe you can both step out of hell, back into the “heaven in our hands”….. back into family.