Skip to primary content
Its’ the feast of St. Nicholas! 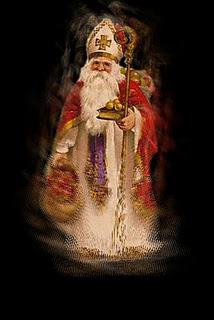 And, as I’m working on my own elfin to do list, in the spirit of the real St Nicholas, I want to put this on the top of our Christmas list.  The real St Nicholas was known to throw small bags of gold over the walls of some of the poor in his village; not the standard help mode of the time….

A citizen of Patara had lost all his money, and had moreover to support three daughters who could not find husbands because of their poverty; so the wretched man was going to give them over to prostitution. This came to the ears of Nicholas, who thereupon took a bag of gold and, under cover of darkness threw it in at the open window of the man’s house. Here was a dowry for the eldest girl and she was soon duly married. At intervals Nicholas did the same for the second and third; at the lasttime the father was on the watch, recognized his benefactor and overwhelmed him with his gratitude

So, in light of the spirit behind that…by which I mean, doing what works to help families – because we all need it from time to time….I offer this.  This is what I want for Christmas.  I want a new stove.  I don’t want the biggest Viking house beautiful stove or cooktop. I want this stove.  Because it will be a way to make a home more beautiful, and a family do better, this Christmas.  Go, see.  Put a stove on your list!  Put ten!  This present will last longer, taste better, and bring more joy than any other gizmo that is topping the charts.  Step into the spirit of Father Christmas today…..
The Adventure Project Holiday Stove Campaign from The Adventure Project on Vimeo.
“All I want for Christmas is…a stove or two or ten!”
Think about THAT as you’re warming up your cocoa! “

1 thought on “Checking it twice….stoves!”