Ruth Buzzi, that is….

You see, last night Coffeedoc and I got all gussied up and drove downtown to a lovely  fancy restaurant.  We were celebrating our 25th Anniversary and we were just happy to be out of the house and be able to have an uninterrupted conversation and enjoy some a nice delish quiet dinner.

And so we did…we arrived a bit late, per usual, and we were escorted to a quiet corner table.  As we perused the menu and wine list, it happened.  The server said to me, upon pouring some water, “Here you are Young Lady.”  Really.  No big deal, right?  Hmmm.  But then, he brought my wine…and said it again!  Now, I’ll let that go, if the speaker is older than me…say, someone around the age of my father (who is now 80).  I immediately looked over at Tom, who was seemingly captivated by the menu.  So, I shrugged it off.  But, and this is the part where I must have unwittingly morphed into Ruth Buzzi… this waiter began to use that phrase with almost every turn of attention to us.  Truly.  And of course, only to  me.  Because somehow this young pup (I am now pulling out all of my old fogey lingo since I am old enough to have perfect strangers patronize me) thought that it was somehow charming to continue to refer to me as “young lady.”

Now, many of you might think, “Gee, what’s her problem? That’s not so bad, don’t get your panties in a knot…”  But, if you are thinking that, I’d lay dollars to donuts (another fogey phrase…) that you’re YOUNG!  And while I may very well be staring down the barrel of fifty (that’s the rumour at any rate…), I haven’t yet really started considering myself officially, really, OLD.

But now, thanks to this young waiter….I feel like a rickety old crone.  I know it shouldn’t make me feel so, but, it does a little bit.  Gee willikers.  Maybe we old gals are touchy….  Now, we still had a really lovely romantic dinner.  My sweet Tom helped distract me from the patronizing waiter.  I only mentioned wanting to deck they guy once, I think.  But I have to say, to all you servers out there (and I can say this because I DID wait tables for years in college) if you want to keep your customers in a good mood….don’t try out some faux debonair “young lady” comments on anyone older than  you.  It just doesn’t play like you think it does.  Not suave, not cute.  Really.  Makes us old gals a little hostile, even…or at least THIS old gal.  Ahem.  He still got a good tip, because it was our anniversary.  But if it wasn’t…… I’m not deft with the quick comeback.  I so wish I was, because today I have a number of them.  But, since I’m now officially an old doddering crone….I’ll probably forget them. 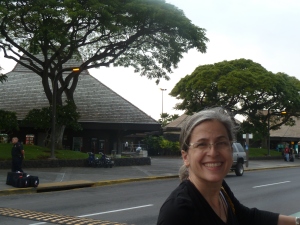 Landing in Kona...we OLD GALS get around!

Forget that…I”m going back to Hawaii…

11 thoughts on “My dinner with Buzzi….OR, Notes to a waiter…”