Now, I have always been drawn closer to Mary, of course. You all know that, and I think St. Joseph would be ok with that, being a gallant spouse.  But even so, I am gathering more and more connections to Joseph as I walk through this life.   As you all know by now, my son is now a Dominican with the eastern province of St. Joseph.  His religious name is now Brother Peter Joseph.  Bricks on the head.  I am being reeled into considering Joseph.  So, in honor of this feast day I am buying myself a hard  hat with the name Joseph across the top.

Permit me this: it just irks me every time I hear that particular phrasing.  Maybe it’s my own chip on my own shoulder.  But, “foster” father.  Hmmm.  Sure, Joseph nurtured Jesus…if that’s what is meant by ‘foster.’  Perhaps this is a holdover term from a different era, with different connotations.  But in our modern day, it seems foster father get’s short shrift (and no disrespect to modern foster fathers, as it’s a heroic job).  Somehow, that term feels rather “less than.”  Don’t flame me now….

But, as an adoptive mom let me tell you that I don’t consider Joseph anything but Jesus’ dad – his earthly, human father.  His place was, um, irreplaceable.  Joseph was the dad in place, on earth, loving and caring and protecting and raising and teaching his son just like any dad of any era.  He was the father.  Not a stand-in or temp; he was Jesus’ father, hand picked by God to raise and love and care for his Son.  For Joseph and Mary’s son.  He was/is head of the Holy Family.  So, I guess I want to make sure that Joseph get’s his cred…he’s all humble and everything so he wouldn’t push for it.  But he did the work, his heart broke and worried and swelled with love over his family and that boy…just like any dad.  In fact he did more, because he had to take the hit and the heat (from Mary even, I’m sure) upon fleeing to Egypt for safety, for bunking down in a stable,  for obediently doing whatever it took to safely care for his wife and child.   So, I’m just saying, let’s not diminish his role, ok?  Thank you.

There is SO much to ponder when considering Joseph.  He loved even when he didn’t understand it all, he was faithful to the core and to the end.  He was humble; didn’t go around bragging on his amazing kid and trying to get the local papers or Nazarene media to scout his boy.  He was a dutiful husband and dad.  He is a model for us all in quiet steady faith and deep giving love.  I tend to, as I said, look to Mary as a role model for how to do better and stop screwing up.  But, I’ll tell ya, I look to Joseph in my heart and prayers, more and more, especially when I am fretful or worried.  I look to Joseph when I yearn for a deep steady loving hand.  I see him in my own husband and my sons.  And, I’m grateful. 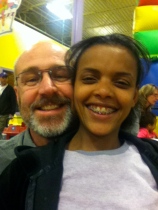 St. Joseph, pray for us!