So many posts rattling my head, so many topics (Lent, adoption, adjustment, family life, art, cooking) so little time. So I’m keeping it kinda thematic today. Because, of course, Lent is on our doorstep and we are paused,  about to step through the threshold. 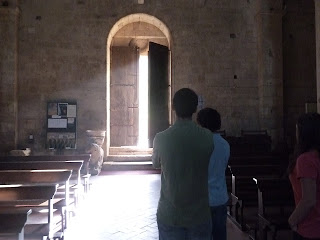 In that vein, while I’m still finalizing my Lenten observances and plans….I thought I’d toss up some of the possibles in the media realm.  Take a look and see if any catch  your eye.  Yeah, I know, there are those of you out there who do the whole ascetic Lent thing.  But I’m a media gal in so many ways and I LOVE books and I LOVE movies…so I’m gonna make a short list here (So that I remember it and so that you might see some new treasures too).

Books first, in no particular order:

This is my most scholarly attempt for Lent.  It’s been getting great reviews and I think it might be good to deepen my understanding and appreciation of the Eucharist; because it can never be enough, that appreciation, even when it feels like it’s all.
These are my own personal Triduum, of sorts!  Yeah, it’s Flannery.  I’ve always had a very very hard time w/ Flannery O’ Connor’s stories.  They have always been lauded as one of our country’s great southern writers, one of the great great Catholic writers, etc etc.  I have read some, not all of her stories, long ago and a while ago, trying again and again….but each time I vow to “never again” because they are SO hard.  I feel like disemboweling myself in my living room might be less painful.  Really.
But I suspect, now, that, once again, it’s my own shortcomings….that I’m just not getting it.  I’ve been reading a bit of her Spiritual Writings (up there to the left) and her faith and intellect is impressive.  Profound.  Which is guess what everybody’s been talking about for oh these past many decades.  So…for lent, I want to finish her Spiritual Writings book, try to  make it much of the way through Habit of Being, and then take a deep breath and reread her classic short stories with a new appreciation (I hope) of what she was getting at in her hard, often brutal stories.  Rereading them is penitential for me, but hopefully it will also be a way to deepen and enrich my faith as well.
Besides all that: she has cool glasses..

What is Lent without the Stations of the Cross? It’s not Lent for me, that’s for sure.  This is the classic version, one you are probably familiar with if you’ve one who prays the Stations regularly, or, erm, Lenten-ly.  I might do Stations posts…or I might not, depends on the busy factor, as usual.

And for you really plugged in types (me too), here is an Iphone app for the Stations of the Cross, written by the late Michael Dubruiel and his wife, Amy Welborn and illustrated by the very cool artist Michael O’Brien.  These stations are not the traditional Liguori version, above, but rather based on Pope John Paul II’s biblical Stations of the Cross, and more modern lingo and prayer rhythm.  So, it’s another option based on taste and time.  Even better, it’s free! Definitely worth a look for those of us on the go, even during lent.

And, last for this round up, but not least, what is this blog or my musings without consideration of food!? Nothing! And yeah, Lent has all that food – to eat or not to eat – element to it.  So, Father Leo might just be the ticket.  He’s great faithful priest, fun, cheery, and a good cook to boot.  Plus I’m a big believer in the whole “family dinner” gig.  I’m gonna look at this book, new to me, and see if I can get inspired for some Lenten mindfulness regarding the family Lenten table.  I’m also planning on cooking down the pantry, keeping it leaner, more soup {I can hear the groans of the kids now, but I love soup – so no penitential effort there for me, but still all good}.

Ok, enough books.  Now to Movies! Why movies during Lent you say? Well, first, because I LOOVE movies.  Second, because, let’s face it, we live in a mass media age and movies are a big deal and a way to tell great stories and also, when they are done very well, help us expand our horizons, thoughts, minds and hearts.  So, with that, here are a few to consider, or that I’m considering:

Of course there are the obvious ones, certainly:

This is the most obvious one, I tend to watch it sometime in Holy Week, usually during the Triduum – Holy Thursday or Friday.  It tears me up, every time.  You all know it’s hard.  It is.  But, well, apropos of the season, of course.

This is the one I watched every year as a kid. Robert Powell as Jesus and Olivia  Hussey as Mary become pretty much iconographic to me as a kid.  Now supplanted by James Caviezel and Maia Morgenstern, but still.  A classic for Lent, really.

There are also some that are worth thinking about, not so obvious, that I’ve been meaning to see, but I haven’t seen them all.  So, let’s be clear.  This isn’t a “must do” list, it’s an I’m looking into these list.  Andiamo:

Tom and Marta watched this one yesterday afternoon, while I was cooking.  It’s in Russian but  has subtitles.  That didn’t seem to bother either one and Tom said it was very interesting and very much worth watching.  So, I’m putting it up.

This also is a great film. Hard to watch if you tend to fall asleep, as I do, because of course, it is largely silent. But it is beautiful and compelling at the same time.  If you are in the doldrums or feel like throwing yourself a pity party due to the difficulty of Lent, pop this in the dvd or netflix que and get a reality check on what living a more austere life really can be.  Then look around you and see how attached you really are to material goods…..ok, ME.  Sigh.  Good film though!

I think this is an oddball charming film about faith and life and do we, can we, really believe in miracles?  Can or do they happen in our own little mundane cookie cutter lives?  I really enjoyed this movie, fun and good for lent perhaps even more because it’s cheery.

Oh, I love this book and I love the movie. I think I love the book more than the movie but most of you won’t ever even try the book but you might the movie, so here it is.  And Dianna Rigg is always lovely to watch anyhow.  But this is a great story of trying to live in faith, how that plays out, the challenges and beauty.  It’s layered and it stays with you.  Get the book, or the movie….it’s worth the time.

This was an odd, popular, quirky movie that I liked.  And I’m putting it in  here because it ultimately calls us to think about our lives and what defines them, who we are living for and how.  And it’s just a fun way to put those ideas out there, with a terrific fun turn by Emma Thompson.  You’ve probably seen it, but we aren’t supposed to be dreary all through Lent, the best approach is to smile through it.  Not always easy, that, so this might be a  help.

And also these three from the terrific “Happy Catholic” blog (I trust her recommends and I have many overlaps):

Haven’t see it yet, because I know it’s violent and hard. But she says it’s most excellent so I think I’ll que it up for this season.  Here is her one take on it: “Redemption, sacrifice, humanity in it’s worst and best are all mingled and shown here.” Sounds like it should be on the short list for Lent.

Also, this one. On my list to see for years, literally. We Catholics love a feast and a fast both, which sums up Lent nicely.  So, too, I’ve read does this film.  So, in our time of fasting this film of feasting abundance might be a good reminder on how that works when it’s at it’s best.

This is a film that “got away.” I always meant to see it and I didn’t, and now I think I’m lining it up for Lent. Obviously, this one hits very close to home.  Direct hit.  It’s about living for another, instead of ourselves.  Which really, is the uber message of Lent, no? Of course it is.  And on this blog, in my head, that’s what I have to learn to do better and better every day.  Happily, this season of 40 days is an intensive inservice in that one.  Hence, I’m watching this movie!

That’s it for now.  Let me know what  you think or add any other ideas, books or films, in the comments box!!