>Why “why?”
You might guess that I am referencing this morning’s craziness (which has all settled down).
Or you might guess that it was another bout of me whining about my basement flooding or my washing machine breaking down (ok, maybe just a little bit).

But you’d be wrong. Mostly.
No, this post is just another short reminder of the silly fun of having a two year old.
Because Gabe’s language is exploding and we now have moved deep into the two year old world of why.
By which I mean, “why?” is the word of the week.
No, it’s not fully understood, but man, it sure sounds good and works wonders.
It can make Mom and Dad stop and grin, and the big kids laugh.
It can get him a hug most every time, especially when it is said with a coy smile and a head tilt.
Because it’s still cute.

And it will stay cute for a short while, until he learns that it is most commonly used with the big kids in a whining sulk or with a defiant stance.
But until then, it’s cute. 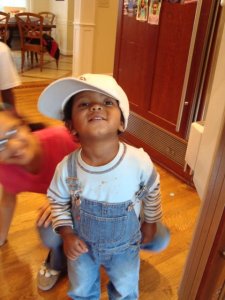