Twenty-Five Years! And it’s better than ever.

I love you for always. 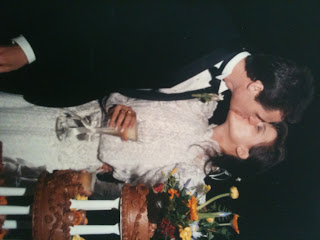 I’m so proud of them.
Because I know it’s not always been easy; life isn’t set  up that way.  But even so, they made the commitment and followed through and the rewards, I would say, have been great.
They are still companions and healthy enough to live together, read, go out to dinner at their favorite spots, fuss at the dogs, and yak about their kids together.
They know each others quirks and weaknesses and strengths.
They take care of each other, in small ways and big.
And really, it’s a gift and example to all of us, their kids.
Because we get to see how love can look over a lifetime.
And what we see is that it’s beautiful.
Because it is.
Happy Anniversary Mom and Dad!
I love you!

>This is something of a blast from the past, but it has special meaning to me today.  This was from an anniversary of ours four years ago…spent at the high school talent show….because our two oldest boys were playing together.  Right there, how cool.

So, because I’m sentimental, and because I like this low-end video…very, literally, home movie-ish…I’m posting it.  Listen closely at the beginning, they wish us Happy Anniversary.
Sweet boys to remember a sweet special day.
Happy 23rd Anniversary to my dear husband Thomas.
What a life we have!
http://rpc.technorati.com/rpc/ping
Atom 1.0: http://blogname.blogspot.com/feeds/posts/default

I do.
Twenty-two years ago.
A lifetime, several maybe….
We were SO young, and didn’t even know it.
But then again, not so much maybe.
We had dated for…ever.
Seven years.
In some ways, we practically grew up together…
seven years, springing into adulthood.

{It was the eighties, don’t judge me.
And yes, we were young!}
We’ve been through so much:
times when we weren’t sure we’d make it,
times when we couldn’t imagine not.
Eras.
Just like any “old married couple.”

That’s what we are now….
Foolishly, perhaps,
it surprises us.
We used to be that young couple….
Now we are the old one,
the one with how many kids?

But here’s the secret, shhhhhhhh:
Now, it’s so much better.

We might be that old married couple…
Not as shiny, or smooth, or skinny….
But we are molded into each other, part and parcel.

It surprises us both, how so long ago it was such a fragile event, really.
It wouldn’t have taken much, he says, for it not to have happened.
A little more fear, a little less hope…
a different choice, or two.
But then again…maybe not.
Seems like it was meant to be.

Twenty-two years.
Lifetimes.
And we can, even now, look at each other with deep wonder and say
“I love you so.”
“And, ever, I do.”