Yeah, how about that for the top expressions you don’t want to have on your short list? But, they are mine.

Because I’m losing my hearing a bit. Yeah. It bugs me like crazy.

And, I feel old. I’d like to say that this was just another piece of the hit list that is turning fifty. But I fear that I have that more genetic loss: the “cookie bite.” (I know, so apropos of my sweet tooth, you’d think it was tailor made for me. Oh, it’s genetic, I guess it was….)

But, I’ve noticed this loss for years. In fact, the doc has called me at home after my hearing test for years to say, “You’d really benefit from a hearing aid.” I’ve dismissed it. Pssssh. Moi? Nah. Who’s got time for the fiddle factor? I don’t need to another gadget to have to fool with. And, since my ears already ring a great lot of the time and I don’t need to add hissing or squeaking to the mix. I’ve already got enough of THOSE sounds from the children.

But, I’m starting, after years and years, to finally consider it. I’m even past the point of caring much what it looks like; though I feel bad that poor Tom would have a wife that looks like a senior citizen. I have the hardest time hearing Gabey. He can be my loudest child, to be sure, but when he’s just talking, he can have a voice that sounds muffled, even if he’s talking in english versus Gabelish. I have to ask him all the time, daily, “What? Say it again.” The girls will come down and tell me that the timer on the oven is ringing or that Anthony is calling me. I can’t hear the kids from the far back seat, though, granted, my car is like an ocean liner it’s so big. Don’t even get me started about talking on the phone, it makes me nuts and is making me feel stupid. In fact, lately I feel stupid all the time. I will often guess what is being said, but frequently I’m wrong. Or I will nod and make polite listening sounds. It works pretty well, unless someone actually is talking about something that I’m supposed to respond to, say at a large table dinner at a gala or event. Then, forget it…I usually get up and cruise the room or go refill my drink (Soda, people! Ok, the OCCASIONAL vodka soda…..Gee whiz….)

It’s not that I can’t hear anything, it’s that the hearing is all wonky. Often sounds physically hurt. The TV and radio is usually just WAY too loud. Movies hurt. Unless, they are too low and then I can’t make the voices out. I can hear tiny beeps, sometimes, that others cannot. I can hear footsteps up the stairs. I sometimes have freaky ninja hearing. But I can’t hear the oven timer. I can’t hear my washer spinning though I can feel it. Erratic speaker microphones are brutal. The priests homilies are often a muffle. It’s erratic. It’s annoying, or even crazymaking, to me and to my family.

On the other hand. It might be more peaceful this way, ha! I cope. I compensate. I can’t tell if it’s pretty bad or if I’m just a perfectionist. I KNOW I’m a perfectionist. (except in housekeeping…and fashion…) But, I don’t know if I’m just a perfectionist whiner (sshhh, I know. I am.) or if this is actually a real problem that would be helped with a hearing aid. I suspect it might be. I read an article about the increase in dementia in people with untreated hearing loss. WHAT?! So, that’s a brick on my head. I’ll take the senior style look of a hearing aid over memory loss in a heartbeat!

So, I have a Cookie Bite hearing loss. It’s genetic. I might just be ready and willing to take advantage of modern technology and see if I can hear better. But……my dad has this very same loss pattern too, and he never has gotten a hearing aid. He’s made it to 80 and is still sharp and gets along fine. So, he has been my role model. My measuring stick. I wonder if I should just suck it up and deal like he has. But, I wonder….he didn’t do the hands on, 24/7 mom-raising of 8 kids.

I don’t want to jump the gun if it can’t help or if it’s just me being a drama queen. But, I don’t want to blow it, because I’d see and live with the fallout, even if I couldn’t hear it. 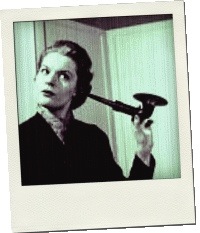