I pray the rosary, every day.

Today is the Feast of Our Lady of the Rosary. 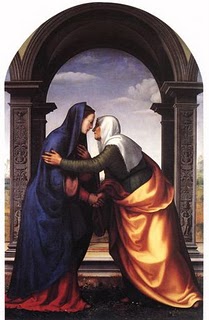 I think, sometimes, people who get all worked up about the rosary forget that we are ASKING FOR PRAYERS, not worshipping.  Just like we ask each other, our friends, our pastors, the clerk at the market….. And they forget that Mary prayed too.  Better than anyone else, ever.  And still does.  For us.  And she’s the  mom.  Christ’s mom! And he’s the perfect son.  And what does a perfect son do? He listens to his mother!  And if he knows better, and can’t do what is asked, he gently explains….. So, I’m just saying, those prayers are worth much.  And regardless of that factor, the rosary is a meditative time that makes any day better and deeper..and so too, me.
Happy Feast Day!
Our Lady of the Rosary, pray for us!

Oh boy, what beads? I love beads! Always have!

I want to talk about the most special set of beads I know or have seen, ever.

These beads are beads from my husband, made for and given to his son.  These beads, they are special ones indeed.

Yup, you guessed it, this post is another in my series on my son’s entry into religious life.  As you all surely know, my Chris is now living this year as a Novice with the Dominican Eastern Province of St. Joseph.  He now goes by the name of Brother Peter Joseph – a whole ‘nother post coming on that one.  {I need to get a sidebar for my posts that are in the ‘mini-series mode’…it would make my life a bit simpler, at the very least. Hmm, site maintenance on my to-do list…}  There is still so much to talk about with this new step in my son’s life.  So much change and so much adjusting going on, for him, for us, for the family as a whole.  Don’t get me wrong, it’s almost all good.  But it’s, well, it’s a lot of adjusting and transition too.

When Chris was getting ready to go to the Novitiate, he was given a list of things to bring. (I’ve decided to use Chris when talking about prenovitiate time and Bro Peter Joseph when talking about the time after he took his new name…keeps my head from spinning.  Hope this helps you keep up too.)    It was a VERY short list.  It was the basics, really, because that’s all he really needs. Heck, it’s all any of us really need, right? Right.  But, it was the usual stuff: a set of work clothes and exercise clothes, underwear, socks, tennis shoes, black shoes, limited personal toiletries, a breviary, bible, etc.  Then, there were two “habit specific” items: a 1.5 -2″ black belt and a 15 decade rosary.  That’s it.  That was the list of must bring items, with any additional items strongly discouraged.  Vow of poverty, simple life, and all… These list items were things he already possessed, except the belt (oddly enough) and the rosary.  The belt was an easy get, of course.  The rosary..well, it could have been an easy get.  A quick drive down to St Mary’s bookstore, where they have a lovely selection of rosaries of all types and stripes….

But, in thinking of it, this rosary was kind of special.  It needed, ideally, to be one that can last.  Stand the test of time flying and fingers praying.  Stand the test of wearing, day in and day out, through the bumps and knocks of any given task, however mundane: dishes, serving, laundry, singing, praying, studying, and so on. So this rosary needed to be durable, but also have a good feel.  Not flashy, but not cheap and breakable and something to worry over.   No surprise then, that Tom, Coffedoc, the dad…he had the idea to make one.

Now, permit me an aside: we parents were keenly feeling this move approaching.  But you already know that.  And, as parents are wont to do, world over, we wanted to send something with our boy/young man/beloved son.  I had even made him a small painting of St. Dominic, in case he could bring such a thing for his room.   Chris said he couldn’t take it with him.  Ouch.  But. Ok.  We couldn’t give him money – vow of poverty and all.  We couldn’t give him lovely THINGS – vow. poverty. simplicity.  No  cashmere socks, ha! No fancy watch.  We couldn’t give him electronics – vow. poverty. simplicity.  You get the idea.  I know, I know, it was desperation of the departure taking it’s toll. Foolishly or not, we had the very strong urge to give him a part of ourselves…somehow.    Even though of course, he was and IS a part of ourselves, built in, and that travels with him no matter where he goes.  Still.  The urge was there.  Thus, when Tom hit on the idea to make the rosary, Chris kindly said, ok.  It was a kindness, he was unsure if it was a good idea or if there was time.  But he knew, we all knew, that if it could be done in time, it would be.  So he said, “Ok, Dad, that’d be great.”

Thus began a kind of lovely intense time leading up to the departure for the novitiate.  Chris and Tom spent a lot of time together…looking for the crucifix, selecting the right one.  Finding a crucifix prayed over by another Dominican, a sister from years ago, worn just right and with the heft of time and prayer.  Simple, lovely.  They pondered what made a good feel to a rosary, the materials used to string it: wire, links, string…what would be best, lasting, have a good feel.  What size beads, what material, what heft, what feel?  It sounds like a lot of fussing, but it wasn’t fussing, it was a joint project and it was time together, talking, evaluating, hanging out.   Chris didn’t want it too precious, needed to pull back his father’s natural urge to find the most amazing special coolest ever parts of this or that….remind dad again of the simple life he is thinking of, being possibly called to.  Nudge, pull, push…listen, understand.  Both of them.

Finally, the parts were in.  All materials needed to be and ended up the simplest, not expensive, but strong.  The crucifix and centerpiece found and arrived, agreed that they were “just right.”  The beads arrived, wooden black beads, just right.  The cord to string it all, finally, located and brought home (harder than it would seem, that one).  The length determined, adjusted, fixed.  The knots practiced, tried, adjusted.  Different knots for between the beads, then the decades. Special knots for the crucifix and the centerpiece; complicated beautiful and secure.  Thus, finally, the actual making of this special rosary could begin.  This sweet dad, he stayed up into the wee hours many nights, he knotted and he pulled and measured and tested, knotted, reknotted, redid it to perfection.  Almost.  Tom would point out, here, “No, not perfect.” 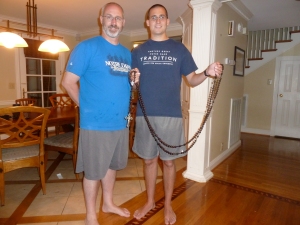 But it was perfect. It IS perfect.  The entire process was pure gift of himself.  To his son.  It makes me cry to type it, it means so much to each of them, but so too, to me.  The hours put it, a prayer over each bead, each knot, for his boy.  Each time our son, now Brother Peter Joseph, prays that rosary (which is daily) his fingers slip across the same beads and knots that his father too held in prayer and love.  He carries that, all that, tied to his belt with him, at all times.  That very rosary stays hooked on his belt and habit.

Thus, my son, carries a huge piece of his father’s heart and love with him, always.

And  yes, of course, he does anyhow.  With or without that particular rosary.  We know that. He knows that.  But, those beads.  Those deep brown black beads…. They are a tangible touchable reminder, for him and for us…that we are linked through prayer and beyond time.  That particular rosary – I can say because I only watched the whole deal, I have no personal glory here – it is stunning.  It is simple.  It is beautiful.  Not only because my husband can tie knots like nobody’s business, not only because he is a master craftsman.  But because that rosary is the tangible embodiment of a father’s deepest love and prayers for his son and entrustment to our Blessed Mother through those seemingly simple brown beads.

Now, Brother Peter Joseph, receiving the habit and with it, the beads

So, yeah, it’s about the beads…in so many ways, they are kinda special.