Yes, there is a man on the engine of that plane. And so goes the story of our travel to Addis.

But anyhow, I figured I should give you the rundown of the actual trip, with a few travel tips embedded. That way those of you compulsive types will read the whole thing and the rest of you…well, you probably wouldn’t care to be bored but of course read along if you like! But for those of you still in process and eagerly anticipating that long flight – here ya go. 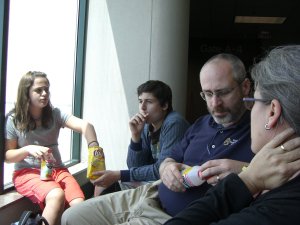 This is us, waiting for something like six hours, waiting for our plane to be either cancelled or fly. In our hometown airport. With no other flights out to D.C. that day, on any airliner. Most of the passengers stood in line forever and got other flights. This was it for us. We passed the time watching the mechanics crawl all over the engines. It was fun. Comforting. ha. So we stress snacked.

I know, it’s another picture of the same plane. Looks a lot like the first picture doesn’t it? Try watching it for six hours as your departure time for your Addis flight looms closer. This is just to get you the feel of it….the ‘you were there’ factor.

As you know, I ended up posting and begging for prayers to make that flight. And I hate little planes. But I didn’t care, if this one was cleared for takeoff, I was gonna be on it! Thanks for the prayers, of course, they worked.

After we got to D.C. we tried to make Mass in the chapel in the airport, knowing we’d be flying all day Sunday. We missed that too. But we sure tried, we went as fast as Booboo’s braced leg would walk! So we said a few quick prayers and read the Mass readings and then hoofed it to the other concourse which meant taking multiple escalators up and down and down and up and then waiting for the shuttle to load us up and spit us out again. By this time I was a stressed maniac, wanting to sprint to the gate. We were cutting it super close, and had conflicting info on when you had to check in at the gate. One woman told us an hour, one told us 45 mins.
Travel Tip: Don’t do this:

on your way to the Ethiopian Airlines Gate. I know. It’s tempting. However, it might cause the mom person to almost stroke and it just causes general discord. Wait until you’ve checked in. There is another one of these photo ops not far from the Addis gate, really like 30 yards or so.
Travel Tip: CHECK IN MUST BE AT LEAST ONE HOUR BEFORE DEPARTURE. MINIMUM!

No kidding. We got there, ok, me first, as I can move in a speed walk and I shamelessly belted it to get there faster than my boy could walk. I know, bad mom, he’ll need therapy later, we’ll add it to his list. But the desk guy was calling us by name as I approached, being the last white family, and family period, not checked in. That is never a good sign. Then he shuffled our papers a bit as the others caught up behind me and had a bit of discussion with his co-desk buddy. As I caught my breath (I told you, it’s a long walk and we were going as fast as possible) he finally handed me our passes and said “you guys are really lucky today.” “Huh?” “You almost didn’t make it. We are boarding now, he’s in a good mood.” Yikes!!! So, they are serious about that check in time and don’t push it. ONE HOUR BEFORE DEPARTURE, MINIMUM, NO KIDDING. That’s the most important travel tip of my entire journey. You can stop reading now if you like, you’re good to go.

We boarded immediately. Well, as we got in line to be boarding (and it was moving) my husband was buying sandwiches from the shop across from the gate. Expensive but decent and better than the food you’ll have for the next 18 hours. Think about that too. That’s travel tip number two.

Next travel tip: Not much room for carry-on or even largish purses/totes on Ethiopian Airlines. Travel light and sparingly. Also, they are serious when you are in an exit row (where we were moved) and you cannot keep your purse and such with you, it has to go up, so get your book and Ipod before you stow it in the hold above you. The stewards and stewardesses (do they still call them that?) were very helpful and very kind, the whole flight. You get two crews so they aren’t burnt out and exhausted and they are nothing but helpful and patient with a bunch of sleepy tired travelers.

Next tip, it’s a long flight, so settle in and sleep as much as you can. Even though it will be full and cramped, be flexible and patient as there is nothing to do but wait for it to be over. It’s a long haul and everyone just waits it out, but really, very patiently and nicely, considering.

Booboo studied for finals. BuddyBug and Bananas played a looong game of squares {yes on a motion sickness bag, you use what you got folks!}.

Finally, after two hours on tarmac in Rome for refueling (no you don’t get off, you try to sleep some more), and another 6 in the air, we were in Ethiopia. I must say, it was exciting to be flying over Africa and see the desert and then start seeing Addis coming into view. What a thrill for us all! 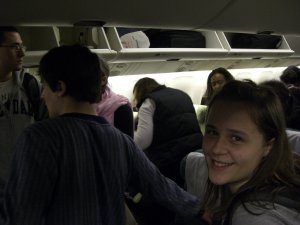 And then, after landing, you wait again, for what seems like far too long (but I think that is typical of every international flight I’ve ever been on as everybody is just twitching to get off that plane). And you are there. In Addis Ababa, Ethiopia. I swear my daughter and I were bouncing with excitement. I know, dorky tourists, but it’s not like we could pretend we were locals so we threw cool to the wind. We were all excited! We had arrived in Africa!!!

To finally BE there after all the reading and thinking and dreaming of it. After almost NOT making it and making our flights, we were just all SO thankful and grateful to be in Addis Ababa at last! It was a little surreal, our bodies didn’t know what time it was but we were ready to GO!