“Weeping Nude” painting by Edvard Munch, 1913
I have hesitated to post this.
But, finally.  I am.
See that woman, in the painting?  That was me, minus the long thick tresses and youth.
No longer.
But I was there.
This post is a stepping out.
I have hesitated, hemmed and hawed about writing this.
I have a knot of fear in my gut doing it.
But I hope, maybe that if I do…then others will see that you can move on.
Others will maybe realize that it is ok if they get snared.
And so that I can be true.  To me.  To this record, my blog, my virtual journal.
So that it’s “out there.”
This post is about that dark secret: things can kinda fall apart for awhile after an adoption.
It can be to varying degrees, but it can also be a form of Post Adoption Depression.
Yup.
Been there.
Done that.
It maybe wasn’t only official Post Adoption Depression, but it was a huge squeezing tangle of that and just generally being overwhelmed by changes and hard differences.
And it scared the life out of  me.
It froze me.
And I feared to let anyone know that I was a mess, outside of a trusted two or three {and, oh bless you, you know who you are}….because no one really wants to be known as the big fat phony that they really are.
Well.
Hello to you all.
That would be me.
Bit fat phony.
Hypocrite extraordinaire.
Me.
Writer of old blog posts extolling the truth and joy of adopting and love and the swift sure glide into same, if only you embrace it fully, unreservedly.
I extolled the utter beauty of adoption.
I still do, if not more so…but for the first time after four previous adoptions, I had hit a wall.
Let me emphasize, tho I felt during all this like a fake, looking out from the mire of last summer…
now, I still hold to those writings.
I did write all those. They were not, are not, lies.  Still.
Even now, still, I believe them to be true…and I see them more clearly.
But I also know, from my own shocked broken self, found too many times on the bathroom floor weeping in gulping panic, that sometimes….those feelings are out of reach.
And that it doesn’t even have much or anything to do with the particular child, it’s just the, um, whole “muchness” of it.
Those feelings of confidence, love and surety are grasped for, mutely screamed for…and they are out of reach.
And the sharp cold piercing icepick of fear and despair stabs just under your ribs and you gasp in shock.
And you weep.
Or, more accurately, I wept.
Then.  Last summer. Yes, then.
I wept at night after dinner, after bedtime until I couldn’t breath and my eyes were swollen shut.
I woke looking like a bullfrog and could barely get out of bed.
Only the pull of my toddler Gabey, prying open my eyes and telling me he wanted milk pulled me out into the world again…that and the clank and clamor of the early morning sounds of a house with many children.
The house won’t wait for despair.
The children can’t understand, nor should they have to, the indigo binding cloths of bleak.
So you muddle along, faking it, trying to breathe even as you are a little bit frozen.
I tried the last fibers of poor Tom’s patience and endurance to be sure; him befuddled by my gulping sobs and shaking head.
I tried to pray, and grasped for words, instead groaning soundlessly.
Finally, stumbling through the first weeks and month home, last summer,  yes then….Tom finally, gently, said with a sad hug “You are hurting you and her and them.  You are not finding your way. Call your doc. Get  help.”

It’s kind of like having a colossal migraine (I get those)…you think you can keep muddling along, dropping things and shunning interaction because it hurts too much, physically, and finally someone says, um, “Look, for pity’s sake, do what it takes to make this stop: lie down, turn off the light, drink some water, rest, take the med,…you’ll feel a lot better and at least be able to get through the rest of the day.”
Tom said that to me, in essence, but this time not about a migraine.
Shocked that he said it out loud, I did.
I got help.
And it humiliates me to type this, even as I know it shouldn’t.
The getting help doesn’t humiliate me.
But the shock and confusion of finding myself overcome on the floor…yeah, those are not my proudest moments.
But I am vain.
I am full of pride.
But I am a phony.  And I know it.
So, I brace now for the embarrassment; but truthfully I have long ago flogged myself for it.
But here is the key, and why I am stepping out: IT HELPED.
It helped.
I thought that I was just a failure.
I failed at my own words.
I failed at loving well.
I failed at persevering.
I failed at mom-ing.
But getting some help, by which I mean admitting I was a mess, not making it.
By which I mean, talking with close friends, family.
By which I mean, stepping forward blindly, soundlessly maybe, but trying to trust in prayer (because yeah this was kind of a spiritual crisis too).
By which I  mean, giving myself permission to be a mess and not a supermom.
By which I  mean, zoloft, for a few months…well it helped.
IT ALL HELPED.
I stopped crying at night on my bathroom floor.
I calmed and was able to be present for my kids again, fully.
I looked to the wider picture.

Nothing changed on the outside of that picture.
The hards were still hard.
The lack of communication and slow building of bonds were still there.
But, with help, I stopped only seeing the disconnects.
I breathed.
I slowed.
I stopped crying.
I was able to look further, by which I mean, beyond my own panic.
So, did I fail?
Um, yeah.
And I do still.  Every. Day.
That’s not new, that’s not even new with this adoption…old old news, that one.
But again, I know I can live with it.
I knew it before, but then, couldn’t see past it.
I really think, it was a good jolt of Post Adoption Depression (and let me say the acronym, “PADS” is simply dreadful..maybe that’s apropos…hmmm).
It’s real.
It’s kind of a post stress syndrome thing.
Maybe lot of it, for me,  might have been unmet, unrealistic expectations.
Maybe it was an impatient, controlling thing.
Maybe, I don’t know…
It might very well be a “failed superwoman” thing.
Because I can very easily get the “big head” and think I can take it on, as a mom.
Well, now I know better, to be sure.
A lot of it was a spiritual “trust” issue, cause apparently I am really bad at that.
Ouch, and “surprise!”
I’ve been humbled to the utmost (well, maybe NOW upon posting I have..ahem).
I will NEVER think I am “all that” as a mom, ever again.
Not that I did so much…but maybe a little, and maybe a lot more than I ever will again.
Anyhow, that first month last summer….it did me in.
Kicked my right back on my fanny.  Or the bathroom floor, whatever…you get the idea.
Yes, I was sicker than ever in my life (can you say ‘swine flu in Africa?” I can!).
That surely didn’t help a bit.
But also, this adoption was just somehow so different than any one before.
Just like every birth is different, and every child is different, so, of course, every adoption is different.  Doh.
Like I didn’t know.
But.  I didn’t KNOW….because I hadn’t lived it to this degree. Or lived this one, maybe.
I could go on.  You don’t want to hear more.
But hear this:
I gave up Zoloft for Lent.
Yup.  I know, goofy maybe.
But OH so hard…scary mostly.
I feared falling under that dark shroud again.  I feared it.
But I didn’t.
And now, NOW, it is EASTER!
{Yes, it is STILL Easter! The season of Easter, I mean…Isn’t that just the coolest thing?}
And with Easter comes the light.
So, I’m posting about this.
I kinda think I must.
Because it is the gift of Easter – we are given back our very selves.
I’ve been given back my very self.
It was time for me to move forward, all these facets (the friends, the bolstering support, the prayer and prayers on my behalf, and too the brief stint on zoloft) helped me walk out of it, that dark spot.
I am back to the me of me, out in the light.  I’ve stepped out.
And it’s bright here.
It’s also still the old standard me moody and louder and has the same ol’ land mines, but they are familiar turf.  The hards are still hard.  But they don’t make me crumple.  They might make me tired and cranky or loud too.  But I can withstand them.  Before, last summer, I could not.  Now, with this time, I can.  And do. 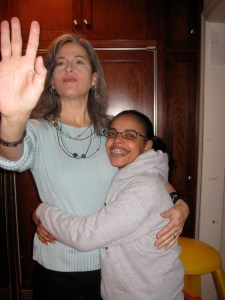 (This is my fake “I am mama, hear me roar” pose!
Too goofy this shot, but perfect for this post where I’m already at my worst.)

But for any of you out there in the blogoverse, if you have adopted and feel like you are under a stuffy shroud of hard and can’t breath…stop beating yourself up, think about help.
You’re not alone, even Melissa Fay Greene has written about this, multiple times, go check.
There are many kinds of help to pull you up from the panic: time, friends, talk, prayer, and yeah, maybe a med for a few months.
Maybe the most important help is to know it happens, to any one of us.
So, give yourself a break.
Help; different shapes and forms and ways.

It can help.
It’s ok.  You are not alone.
You might feel like you have to hide, that you’re alone…it’s isolating in a horrible way.
But you’re not.
You’re not alone.
Remember, been there, done that.
And it will pass.  It can pass.
Read that again, it can pass.
Life isn’t gonna be what it was.
It’s going to be different.
But it’s going to be richer, not necessarily easier, but still oh so good.
Not everything now is perfect or all adjusted or a dreamy soft focus portrait here in my newly grown family.
It’s not gonna be.
And, truthfully, it wasn’t even close before.
But, I want to step out.  I don’t want to be a hypocrite or phony even if you rightly want to call me so.

I am just me, in this forum: this mom full of scars and cracks, bad hair and sweet tooth but trying her best.
Not holding her breath anymore.
Step and exhale…..
http://rpc.technorati.com/rpc/ping
Atom 1.0: http://blogname.blogspot.com/feeds/posts/default

26 thoughts on “>Stepping Out”