>Today is the feast of St. Maximilian Kolbe!

He is my son Jon’s patron and one very awesome saint.
He is a ‘modern’ saint, of the twentieth century, completely devoted to Mary and a Franciscan.

But what St. Maximilan is known for is his sacrifice, his martrydom of charity.

St. Maximilian was sent to Auschwitz Concentration camp, for being a Catholic and a priest. After ministering to his fellow prisoners during his time there, sick and hungry as the rest, Maximilian made the ultimate sacrifice: he stepped forward and volunteered to go to his death in order to spare a father of a family from this fate. St. Maximilian went to his death in a father’s place; dying after two weeks of forced starvation and ultimately, an injection of carbolic acid (and forgiving the one who gave him that shot as he was injected).

As such, not only is he a hero, among many other things, he is the patron of families, and he is the patron of addiction (the needle connection, I’m guessing, and really IMHO due to his inner core of strength and faith, something anyone prone to addiction of any sort needs to get well and be well).

We are big on family here around the coffeeblog.  We hit up St. Max for prayers for many of our friends and families who are going through different hard things but also this year for my Jon as he heads off to college and needs a strong faithful patron to also keep him in prayer.  And the prayers of a righteous man, a saint and patron of families, who knows from sacrificial living, are worth much. So, thank you St. Maximilian, for your patronage of my son, and for your prayers for so many! 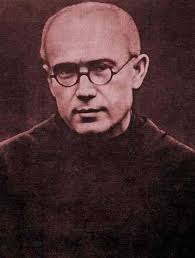 Official disclaimer: Much but not all of this post is reposted from last year because things are slamming here at the coffeehouse.