The Archangel Gabriel
From an icon of the Ethiopian Orthodox Church.

This is of course, in keeping with the feast of the Annunciation today, had to put this up too, since you don’t have the annunciation without the messenger!

Now I love icons, they are called, “windows into heaven.” I haven’t seen too many icons from Ethiopia (although you can find some more and read about them here), but I did run across these and I am tickled to find Ethiopian versions. It’s especially nice to find an Archangel Gabriel who is not only depicted w/ flowing blond hair… We have a particular fondness for Gabriel, the messenger, and we hope he is watching over our boy in Ethiopia even now.

Today is the Solemnity of the Annunciation, (moved from March 25th, due to lent). This is the day the church celebrates the feast of the Annunciation: the Archangel Gabriel coming to Mary and the most important “yes” ever in history. Fiat. “Yes, I will.” Her consent to become the Mother of God. Read more if you like here.

As an adoptive mom, and a mom of biological kids, I tremble (with that adrenaline rush of shocked thrill and joy, but also with the ‘bigness’ of it all) each time we are presented with a child, or even when the child is “announced.” I cannot imagine how she must have trembled. And yet, she said “let it be done.” It is an awesome and fearsome responsibility, to care for a child and give them what they need – this gift from God.

We are waiting impatiently to go get our little boy. As I worry, dream, and wonder about him, this feast day resonates with me.

There are so many unknowns, is he ok, will he be ok, will he bond to us, what will make him laugh, will he be frightened and wary, will I be good enough to work through it all and do well enough by him and all our kids, what kind of cookies will he like, how soon can we get there, will the traveling work out, will he pass court, will we be able to make him smile, how will he feel in my arms, will he and his just older brother be close and laugh and wrestle, will just being there tear my heart open again and again? I stare at his pictures, imprinting his eyes, his face.

But even as all those wonders and worries float around in my head, I hear Mary’s echo from long ago: Fiat. I will. We will. Let it be done. We will love and raise this boy, our own, fiat.

It’s Divine Mercy Sunday. The eighth day in the octave of Easter. In our measly effort to mark the day, we are going to watch the Saint Faustina movie this afternoon and maybe try to be merciful to each other, in the little things. Just maybe, be mindful of being a tad more patient and tolerant of those irritating day to day things that happen in a family. Not so easy. There’s that line in the ‘Our Father’: “forgive us our trespasses, as we forgive those who trespass against us.” Sigh. Gets me every time. Ow. Much harder than it sounds, eh? For me, at any rate. Read more about Divine Mercy Sunday here. 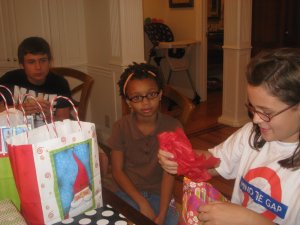 Here is the other half, minus me. More presents, different bday: BooBoo, SBird, BGirl. We have birthday o’rama in this house all through the holidays! 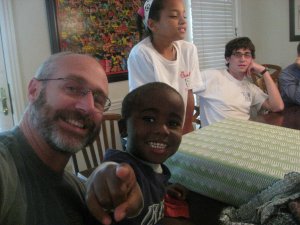 Really, only the people behind us in the grocery store think so…really.

I’ll post a few real pics shortly so you can get an idea of who you are reading….this one was from this years March for Life in D.C.

>Ok, the main impetus for me to start this blog is to keep up with the amazing and talented Ethiopian adoptive families bunch of blogs that I read all the time. Not in a ‘keeping up with the Joneses” sort of way, but rather in a “hey count me in, part of the family” sort of way!

So, here is the short version of our Ethiopian Adoption Adventure:

First, after adopting domestically three times, we figured we were done. Big family, busy, getting older…all the usual stuff. There was this book, however, way out there on my radar. This book, I knew I couldn’t read. So. I didn’t. Not for oh, a year or more. Then, finally, I did. Of course, any of you families in process already know the title: “There Is No Me Without You” by Melissa Fay Greene. So, I read the book, and read parts to my husband. We both cried and it tore us up and well, we knew that just maybe, oddly enough, we were being nudged to open ourselves to another adoption. Yes, it seemed nuts, but we figured that long ago we took the stance “as many kids as God would send us, whatever manner that happened”…so we figured if it was supposed to happen, it would. Prayerfully, nervously, we started the research into Ethiopian adoption.

Now, I am a consumate, compulsive researcher. So I spent the summer researching all our options and what was out there, the agencies and experiences of so many others. Finally we decided on Gladney Adoptions and have never looked back.

We thought of adopting a boy, infant or toddler, since we had three boys but the oldest had moved off to college and out of the house, we also had three girls, closer in age, but still two boys, one teen and one young one. So, since it seemed that boys were harder to place (at least in our research) and well, we loved boys and had one who was just the right age for another brother, well, that is where we would start.

We contacted Gladney in late September, got our homestudy done w/ our earlier local agency {approved for a toddler boy 0-18 months and a sib up to age 4, either gender, if that presented} again by the end of October and were approved by Gladney in early December….when everything came to a screeching halt as our dossier was totally ready too except for that one elusive letter: the immigration approval, not so fondly known as the I-171H form. Apparently, the southern office just takes a while. We waited, and waited, and waited. For 13 weeks. Finally it came and thanks to the amazing Kate of KBS Dossiers, we went on wait list on January 28th of this year.

Then we started waiting again, closely following all the blogs of more hip and happening and cyber-savvy families. We tried to hunker down and know that we would be waiting for 3- 5 months. I hate waiting. You might think I would be good at it, having lots of kids and having adopted three times before. I am not. I am not patient, in fact, my theory is that is one reason God has sent me so many children, I am a slow learner…but I digress.

Joyfully, and to our great surprise, we got a referral for a 14 month old boy on March 14th. He is beautiful and we accepted the same day. And to our even greater shock and wonder and joy, we got a court date on the day after Easter, while driving home from a family visit to our college boy. We love Natalie!! We love Natalie’s phone calls!

So. Now we have a court date for April 17 and we are praying for first pass, even as we keep praying for all the other waiting families for court dates and passes too. This is killing us, as we see our little guy and know that he is getting bigger by the day and he just needs to come home, to his final home, with us.

So, now as we ask favors of our fellow families {thank you Lori and Ted! Thank you Albertsons! You are awesome!} we figure it’s only fair to give you our own version of our crazy wonderful life.

I know. Be happy, that’s the short version!

>So, I am going to give this blog thing a shot. Yes, I know that even that phrasing tags me as middle-aged and unhip. But this blog is for me – to track the mundane and momentous changes in our crazy busy family life. So, just so I can get this up and at it, here we go. This little note is my first post…and probably the dull version of what is to come…awww.