And Happy Feast of Mary, Mother of God. 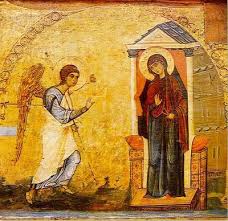 Sounds simple, a no brainer right?
Doh….Mary gave birth to Jesus. Yup. We’re n the midst of the whole Christmas season, surrounded by nativity scenes, Mary pregnant on the donkey, Baby Jesus in the manger….that’s the quintessential “mom” scene.
This IS one of the uber Catholic solemnities….one of the ones that cause some division. But in my humble opinion, that division is not justified; it’s a tempest in a teapot (to use momspeak). So, why the big deal…”Mary, Mother of God?”

Well that term took some theological argument discussion. Ages ago, literally. Way, way, before the “Big split (into the whole Protestant/Catholic deal).” Even way before any real divide between Eastern and Western Christianity. Because it speaks to Jesus and his Divinity and while it seems obvious, it wasn’t so much…and you know, folks like things really pinned down officially and academically. Hence, long ago – 431 AD – they even held a council of the bishops of the world, those who had received the faith, entrusted to them, on down in succession from the Apostles, to officially pin this all down. Because someone was teaching that Jesus wasn’t divine from the moment of his conception or even birth, but taught that he was elevated to divinity later. Was Jesus divine from the moment of his conception, or was he born only human? Did Mary give birth to a human person or a divine person? Was Mary, or was she not, in that sense, “Mother of God?” Can we even speak those words? Well, God chose and prepared her for Himself, from all the women of all time, to be the bearer of His Son. And while the first person of the Trinity, God the Father is the sole source of Jesus’ divinity, from “in the beginning”, and Mary the sole source of his humanity, by the power of the Holy Spirit these two natures are inseparably, indivisibly, united in the one person Jesus Christ from the moment of His conception – thus declared the great council of Ephesus. And as God’s Son is Divine and not only human, well, then Mary properly IS to be called the Mother of God.
The precise title “Mother of God” goes back even further, at least to the third or fourth century. In the Greek form Theotokos (God-bearer), it became the touchstone of the Church’s teaching about the Incarnation. The Council of Ephesus in 431 insisted that the holy Fathers were right in calling the holy virgin Theotokos.

Really, it just remains kind of mind blowing to me. Mary had the choice to say, “Um, nope, not doing this, too hard, too strange…really? Mother of God? I don’t get it….let me think about it.“ But she didn’t. She said “Yes.” “Fiat.“ And thus the world began to be brought back into the proper order and we were all given the best present ever.
“Long lay the world, in sin and error pining,
’til He appeared, and the soul felt it’s worth”

So today I am looking at icons. Because today, on the last day of Christmas, we celebrate the mother, the Theotokos, the “Mother of God.” And really, icons are about the only way to begin to wrap your mind around all this. Because who can imagine God, really? You can’t. I can’t — not really as He is. And as soon as you think you are…well, you’ve fallen into presumption now, haven’t you? So, icons are perfect for today. They function as “little windows into heaven.” Icons (Ikonos — Images, in Greek) are images of the true Ikon, the one who images the Father, the one who shows us the Father, the face of God, that he revealed to the world “in the fullness of time” born of a woman, of a pure and holy virgin. Whom He loves more deeply, more perfectly than any other son loves his mother, and whom “all generations shall call blessed”.

They are not meant to be realistic or have realistic lifelike perspective. They represent what we cannot fully see with just our own eyes and senses; they image the world beyond the veil, the divine, the eternal. And so today I want to look at these icons and ponder them. Ponder what it means for her to be the Mother of God, the Theotokos…what faith and trust it took to say ‘fiat’, ‘be it done unto me according to thy word.’ To contemplate the fullness of it all and take maybe one or two(or the multitude that I need) lessons from it.

Today ends the Octave of Christmas. The new year is launched. It is set in motion with a remembrance of the greatest faith and hope and love. We step into the new year on the right foot, so to speak. Today we celebrate mom, Mary. I like that so much. And, it’s really no coincidence that it’s also the World Day of Peace. Because we mom’s, we are all about peace: the seeking, the getting, the craving, the searching, the making of peace.
Peace almost always begins with the mom.

Thus, we need today’s World Day of Peace and New Year to coincide with the Solemnity of the Mother of God. It’s a big job, a big day. We need the the biggest hope and love of the best mother….because she brings us her Son.

Mother of God of the Streets, by Robert Lenz

**Reposted from last year, I’m outta town, so bear with  me.  But it’s a great feast day and I want to mark it.